The pictures are up so I thought I'd write a few words about this particular show.  It was an interesting venue to say the least.  As Jim and I were staying just outside of San Francisco it was about a 3 hour drive to the small town of Friant.  Friant is seriously in the middle of nowhere.  Along the way we passed a lot of fields, cows and the ranches that went along with them.  After about 3 hours and 15 minutes on the road we finally came upon the appropriate exit for the casino.  There was a moderately sized gas station and food mart which looked as though it were built quite recently.  We decided to pull in for gas as we were unsure if they'd be open when we were on our way back down the mountain.  Once the tank was filled we were off to see Daryl Hall and John Oates!!
We finally made it up to the casino.  A sterile looking building upon first glance...and it felt the same once we got inside.  The playing area is quite small.  We were able to walk across in about 2 minutes.  There was a VERY small cafe serving snacks and beverages as well as a sit-down restaurant and the obligatory buffet.  I should also mention that this was a DRY casino.....yes DRY!!!  Ugh!  I mean I am no boozer but when I go to a show I like to have a drink or two...oh well.
Anyhow, we needed to eat something so we opted for the buffet.  It was a good price at only $12 a person.  The price did make us a little leery...but, we went for it.  Oddly enough it was really good!  Our waitress was very pleasant and consistently brought us drink refills and removed the used plates from our table.  Jim and I both thought the salad buffet was great.  Everything was really fresh and plentiful.  They were also serving New England Clam Chowder as the soup of the day...being from New England and having a husband that makes THE BEST NECC I always give others a try to see how they measure up.  This one wasn't half bad.  We sampled the other offerings including mashed potatoes, baked chicken, pasta salad...all the traditional buffet standards.  Everything was well prepared and fresh.  We tried their Asian buffet and it was a poor excuse for Asian cuisine...the Orange Chicken tasted like it had been soaked in Tang....remember Tang??  UGH!  For dessert we each had a small dish of soft serve chocolate ice cream...tasty enough...pretty hard to mess that up.
During our meal we happened to run into Everett Bradley at the buffet.  He's always so sweet to the fans.  Big hugs all around and then off to finish our meals.

Like I mentioned before...this was a really small casino.  After we ate we took the 60 second stroll over to "Will Call" to pick up our tickets.  We had to wait another 30 minutes or so before we could take our seats.  So we sat at the penny slots for a few minutes and ultimately got in line.
Once allowed into the Event Center I was truly underwhelmed.  I've been to enough trade shows and meetings at hotels and civic centers in my day.  So I knew that there was a good possibility that the California Chapter of Retired Knitters could have held their convention in the same room a week prior.  The room screamed annual conference not rock show with it's floral carpeted floors and drop ceilings.  Not impressed.  Anyhow...the stage crew were diligently making final adjustments to instruments and mics.  Jim spotted our pal Andrea Muraglia, she's the gal that handles the teleprompter for D among other things.  He told her that I had a press photo with me (I always travel with things to have signed) of Daryl & John with David Ruffin and Eddie Kendrick...she offered to have it signed by D and J and scurried away with it.  About 20 minutes later Road Manager - Rick Rosabella brought it out to us and said how Daryl was glad to see that picture and started telling stories of that night with the Temptations. COOL!!
We got the skinny about cameras and such from Rick and the security folks.....only small point & shoot cameras would be allowed.  Rats!!  I knew the lighting was going to be total poop...and I was right!  Soon the guys took the stage and all was right with the world!  The guys played Method Of Modern Love which is one of my fav's....they don't play it often enough in my opinion.  About midway through the show this older couple comes and stands next to me all gyrating on one another....the woman was trying to get up to the stage.  Security wouldn't allow it and she took it upon herself to make their home next to me in the aisle.  If looks could kill....she would have been dead...she got the point...
Encore time!  So I'm all ready to skedaddle to the stage....DENIED!  This security dude was denying me my pleasure...folks on the other side of the stage got right up there...finally the weenie gave in and let me through.  I took my spot right in front of Paul!  YAY!  I will give this security dude credit though....there were two "fine young things" with their hoo haas hanging out and he held fast and would not let them get their way earlier in the show.  Oftentimes I've seen their kind get MORE than their way....so that made me happy.

And then the show came to an end....but it was okay!  I knew I had 2 more shows to go!!  Ooh I should also mention that on our way out we stopped at the little cafe and got a GIANT chocolate chip cookie to share....it was great...all warm and gooey.  And off we went, back down the mountain!

To see photos of this show CLICK HERE!
Posted by Kerri at 10:26 PM 3 comments:

HALL-o-ween Is Around The Corner - PLAYLIST

Halloween is riding up our coattails!!  I drove by a house in my neighborhood earlier today and they had no less than 25 carved jack-o-lantern's on their porch....a little too much time on their hands but, hey, to each their own!  I prefer to celebrate Halloween, or, HALL-o-ween as I prefer to call it, with music.  There's nothing like a special spooky Hall & Oates playlist to get your blood boiling.

Now you might say "Kerri, H&O don't have any Halloween songs!".  And I would respond by saying "Why yes they most certainly do!"

Maneater - A grotesque theme with a focus cannibalism.

Do What You Want, Be What You Are - A timeless anthem for boys and ghouls alike!

Dance On Your Knees - ....when an axe murderer has chopped off your feet...

Crazy Eyes - In my punch bowl!

When The Morning Comes - You will have a belly ache from all this candy!

Running From Paradise - Because it's infested with zombies these days...

Screaming Through December - A frightful ballad to say the least.

Head Above Water - That is of course when we are done bobbing for apples.

I'm In Pieces - Another reference to the above mentioned axe murderer?...I'd say so!

Your Imagination - Seeing things again or was that a ghost floating down the hall?

Fall In Philadelphia - Yup...it can be pretty frightening at any time of year...

No Brain No Pain - A traditional zombie folk song.

Better Watch Your Back - Good advice for All Hallows Eve.

Happy Birthday to My Idol & My Inspiration! 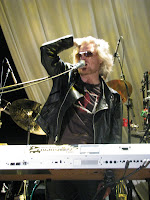 Sixty-four years ago my most favorite musician and lyricist was born into this world.  Can anyone guess who that is?  Yeah, I thought you could!  There really is not much else to say...he truly is an icon to me.  His music has been a constant in my life for a long time.  His lyrics lend advice to most any situation.  And more importantly, they tell a story and transport you to another place.

So rather than bore you all with my sentiments I will share with you a bit of a video/pictorial tribute I conjured up a few months ago.  With that said..I wish the Happiest of Birthdays to my idol & my inspiration.....Daryl Hall.... 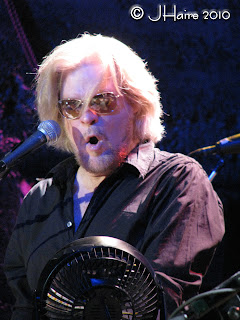 Sometimes a thought or idea for a blog article just hits me...from out of the blue.  For days now I've been trying to think up a clever way to segue into my reviews of the Hall & Oates shows last week in California.  To be honest, I've got nothing.  I mean, I know what I want to say...how wonderful they were and how great it was to see fans from the west coast, etc etc.....but the delivery...that's what I am undecided on.
So I was reading one of my favorite publications a few moments ago (Goldmine for inquiring minds) and I decided that what I was really itching and longing to discuss is Daryl's upcoming solo album.  While there is still no solid information available out there right now regarding title, track list, special guest appearances...yada, yada, yada.  I simply cannot wait to hear this thing!  What we DO know is that it will be released in the first quarter of 2011 and that it will be on the Verve label.  Everything else is pure speculation.  And I say speculation is GOOD!!  It gets the blood pumping and the mind moving.  I mean, seriously, how awesome would it be to get a Daryl album picking up where Can't Stop Dreaming left off.  A full size serving of soulful, jazzy smoothness from the golden voice himself.  I swoon at the thought!
It's been 15 years since Can't Stop Dreaming was released to Japanese audiences.  Hmmm...coincidence that H&O are headed to Japan in early 2011??  A lot has happened in Daryl's creative world since then.  And that's to be expected of course.  We'd be fools to think he was in the same creative place or working with the same producers and writers for that matter.  I can't help but thinking this album will take on a "rock-ier" feel given the direction of Live From Daryl's House and it's appeal to the younger crowd.

And now to tie in one of my experiences from last weeks H&O shows in CA.  The set's from the first two shows included a song which is in my "Top 5" Hall & Oates tracks.  D & J cracked "Method of Modern Love" out of the cedar chest and played that sucker as if it were 1985.  Pure bliss ran through me and the track sounded better than ever!  You could see the elation on D's face.  I've always thought that "Method" was the quintessential Daryl song...even though it was written by he and Jana Allen...I think the thoughts and lyrics scream Daryl.  If someone were to ask me to name a song that defines Daryl and speaks to what he is about...it's this one, hands down.  Now, if he'd only lose the guitar....